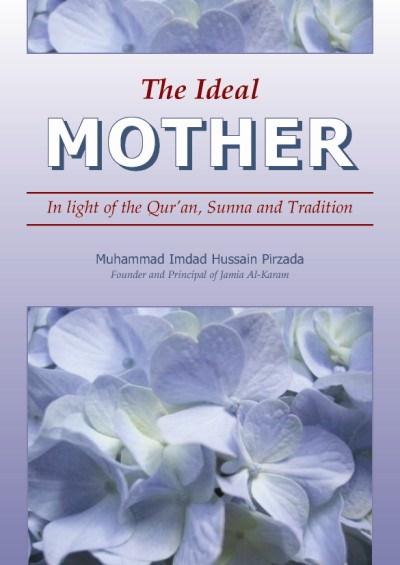 THE IDEAL MOTHER: IN LIGHT OF THE QUR'AN, SUNNA AND TRADITION looks at the various stages of motherhood and discusses Islamic rites and tradition, nurturing and fostering, education, upbringing, the onus and rights of the couple, mother and children and also illustrates the differences between imprudent and wise mothers.

Ever since the creation of mankind, relationships have played an immense part in the formulation of society and in the progress of humans. Islam has placed great emphasis on the different roles that are played by various individuals in evolution of society and people.

Shaykh Muhammad Imdad Hussain Pirzada has highlighted one of the most important and influential roles that has dictated the lives of humans since creation, the role of the mother.

In this latest offering to the Muslims of the West he has highlighted what the significance of the role the mother has to play in the upbringing of her children. A child, from the time of birth to adulthood, has most contact with his or her mother, thus it is inevitable that it gains the most from this contact to prepare it for its future. The author has highlighted the various roles the mother has to play, for example her roles as the child’s primary carer, her role as the child’s first source of education amongst other roles.

The book begins with the status of the mother being highlighted to give the reader a good footing into understanding how important she is and how high Islam regards her. It then moves onto issues such as the rites observed at the birth of the child such as naming the child, ‘aqiqa, and other practices. The author then discuses the necessity of good education and upbringing and throughout the book gives sound practical guidance as to how the issues should be tackled in the light of Islamic teachings. He elaborates on the definitive aspects of this sacred relationship by presenting thought provoking examples from tradition as well as personal experience.

In short the book is brief and thought provoking with the aim of providing basic but essential teachings for parents.

The author has excelled once again in providing wisdom into the role of Muslims in society. The book delves into what roles Muslims are expected to play in the upbringing of their children to ensure that society continues to evolve and progress. He has provided sources from the Holy Qur’an, the Hadith of the Blessed Prophet (peace and blessings of Allah be upon him) and from personal experiences to throw light onto the importance of having children and providing a secure and proper upbringing for them.

It is an essential source of guidance for couples bringing their children up in today’s society.