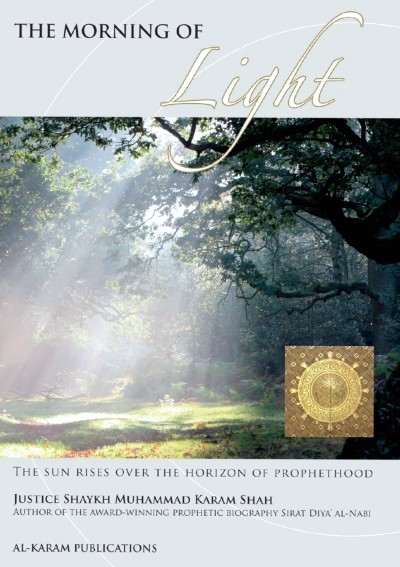 THE MORNING OF LIGHT is a scholarly discourse examining the major issues relating to the auspicious birth of the last and final Messenger Muhammad (Allah bless him and grant him peace). The book opens with a narrative account of the events which took place at the time of the blessed birth. It then moves on to an analysis of the exact date as proven from authentic sources. There is an interesting and thought provoking discussion on the permissibility and validity of celebratory gatherings which draws attention to the fallacy of those who reject such celebrations and public manifestations of joy.

JUSTICE SHAYKH MUHAMMAD KARAM SHAH was from amongst the scholars of Al-Azhar and was one of the leading academics, intellectuals and thinkers of the twentieth century. He is the founder of the educational institution of Dar al-‘Ulum al-Muhammadiyyah al-Ghawthiyyah (DMG Bhera) and the Ghawthiyyah Girls College in Pakistan which has over one hundred and fifty branches in the Indian subcontinent. He is the author of the renowned five-volume Qur’anic exegesis Tafsir Diya’ al-Qur’an and the seven-volume masterpiece on the life of the final Messenger Muhammad (Allah bless him and grant him peace) Sirat Diya’ al-Nabi.

He was a justice at the Supreme Court of Pakistan from 1982 till his death in 1998. He was a follower and shaykh in the spiritual path of the Chishti tariqah. He served the faith of Islam and the Muslims in many spheres of life including academia, education, journalism, judiciary, literature, oratory and spiritual guidance.

Leading scholars and mystics of his time testified to his spirituality and revivalism. In terms of spirituality, seeking the pleasure of Allah (Most High), possessing tremendous love and devotion towards the blessed Prophet (Allah bless him and grant him peace), concealing one’s own state and sheer steadfastness upon the Truth were amongst his great attributes. Thus, he was widely known as Diya’ al-Ummat, the luminary and light of the Islamic community.